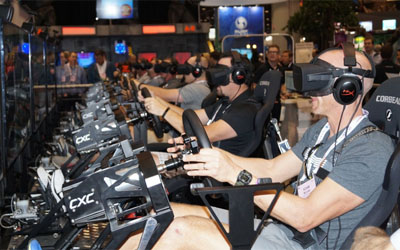 The largest international entertainment exhibition industry is held in Orlando (Florida) every year. More than 30 000 people from 100 countries all over the world come to IAAPA Attractions Expo to study on industry innovations and to sign partnership agreements.

New amusement parks are constantly opened and already-existing parks are completed in the United States. The entertainment industry develops and the market grows. Perhaps, this is why the exhibition in 2016 is more large-scale than previous.

In Orlando, I went more than once so I consciously didn’t focus attention on those attractions which are already familiar and I looked for something new. Virtual reality, water parks and catering services in entertainment centers (Food & Beverage) are directions that I was interested in.

The future is in virtual reality

Many participants provided equipment using the virtual reality (VR) at the exhibition. 5D movie theaters are actively developed. Dynamic platforms are improved. A picture shall be most synchronized with movements of the platforms that immersion to the world of virtual reality was complete without distracting moments.

In 2016 HTC Vive virtual reality helmet came into market that caused a new round in VR development. It will take a couple of years when shooters, car — and motor-simulators that are used to us will move into a virtual reality format. Players will watch the picture not on a screen, and by means of VR helmets.

Not only entertainment equipment manufacturers come traditionally in Orlando but also companies that supply devices for food. In several of our entertainment centers we hold Ultra All Inclusive days. Guests are offered a full range of entertainments, food and drinks paying a fixed amount. We are especially interested in original decisions for «all inclusive» format.

Donut Maker was presented at the exhibition and I seriously thought to buy it. Process of donuts creating is real show! We want to mount the devices so that Guests could watch cooking. It turns out fast, tasty and spectacularly. 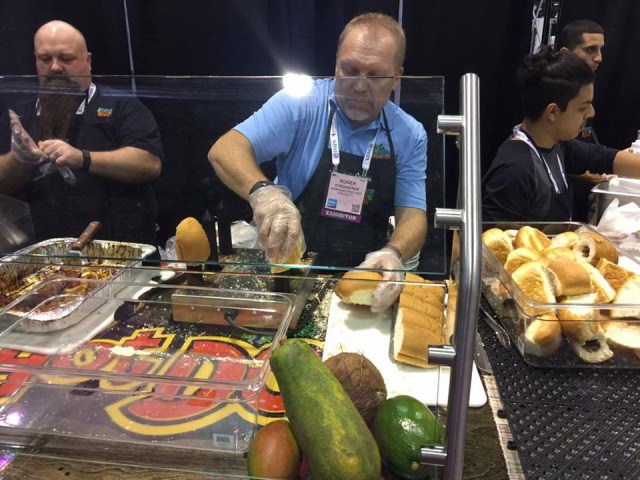 At the same time, there were devices that will hardly get accustomed here. A snow making machine is popular in Florida. They fill up ice in it, mill and put in a glass. Then syrup, add fruit and eat. Under our conditions, it is as good as to sell snow in the winter. 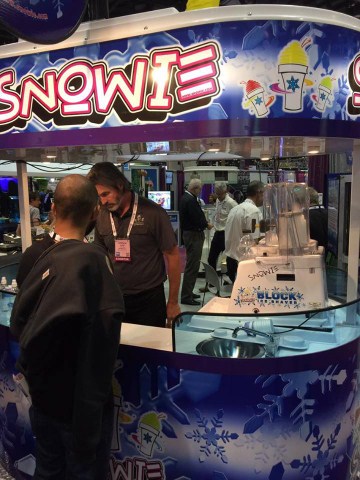 Spherical movies theaters attract interest. Scales strike — a dome of such movie theater is 30–50 meters in height. It has two hundred seats for audience who «are suspended» in air or in chairs on a platform. Special movies are made for such movie theaters. For example, you can experience the feeling of an earthquake, a tsunami, «to participate» in space flight, etc. At the same time the image is broadcasted on a spherical screen located by 360 degrees around a viewer. 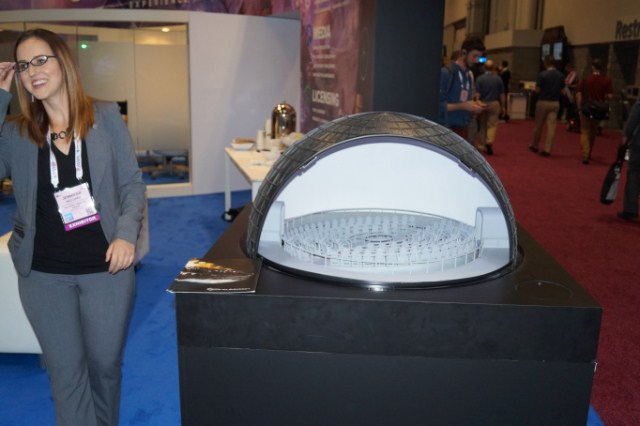 Back to the future

My attention was drawn by gaming machines as games that were popular in the 90th, they are Pac-Man, Space and Waders and Tetris. Today games that are familiar before are provided in new more perfect format. Exposure effect played out at many exhibition visitors and they want to play. 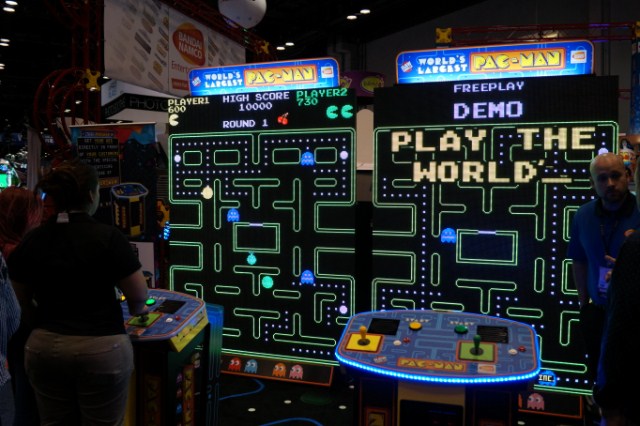 The essence of a game is that when competing quicker to press buttons which are lighting up in a chaotic order than others. TimeFreak has always been quite expensive attraction. Price of standard equipment is 35 000 euros at a manufacturer. Plus, delivery costs, customs, installation. As a result, cost reached 3.5 million rubles. Now the equipment is available.

Manufacturers presented a set composed only of buttons at the exhibition. These buttons may be attached anywhere — in your room, at an office, on a trampoline, etc. Bring at your party, hang out on walls and you have the unique attraction. 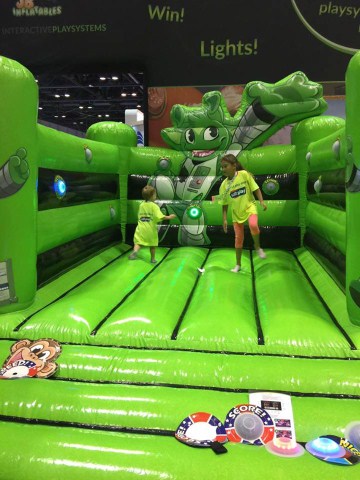 Manufacturers of cars finally decided a problem of clamps (substitutes of seat belts) that is urgent for our entertainment centers. Usually a clamp of a person fastens behind the car. When guests threw back the clamp, it quite often broke back headlights. As a result, more than a half of cars were «broken» in the park.

We have long puzzled over to avoid breakdowns. I saw modernized clamps for the first time that solve this problem at the exhibition. Most likely, the following batch of cars which we will order will be already advanced. 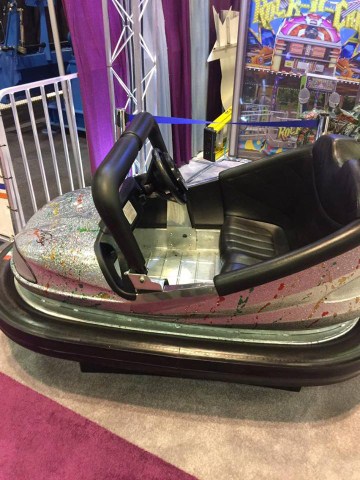 X-treme Dance Party is interesting decision for children’s discos. A trampoline disco wherein everyone can jump and dance with light music. Children perceive it with delight. 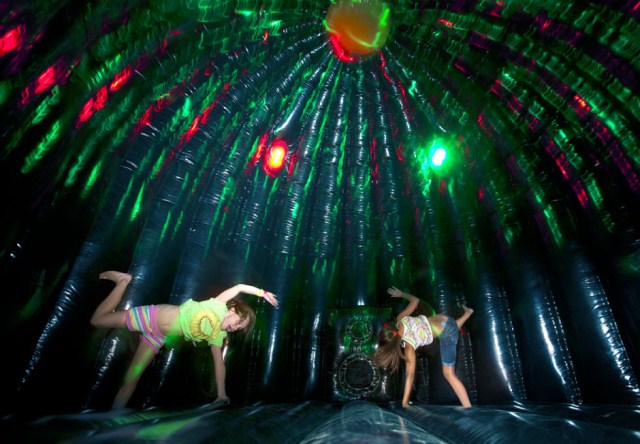 Kinetic sand boxes for little archeologists was pleasant for me. Kids can dig remains of dinosaurs with pleasure, and older children may collect a skeleton of a prehistoric animal by type of designer. 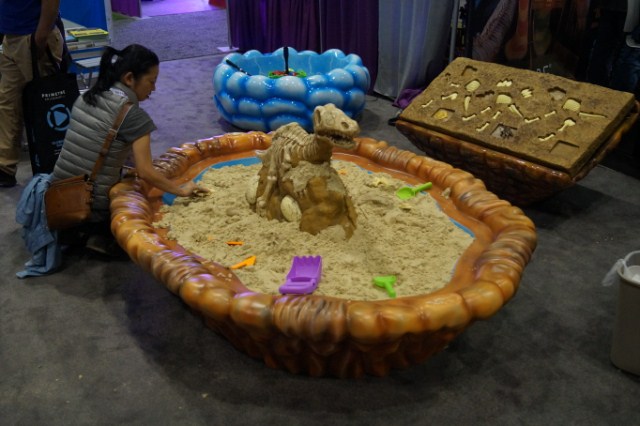 There were also entertainments for treasures hunters. To become a gold digger, you can just purchase only a sack with breed in which nuggets are hidden in soil and sand. Treasures are washed in an improvised stream using a tray. Just so gold diggers washed gold. If desired, you can receive a booklet that will help to determine what minerals you have.

I found that adults played gold diggers and were glad to findings with not smaller passion, than children. By the way, the word «passion» centuries mentioned in relation to games, always had more a negative shade. Till last decade it practically didn’t change its value. However now this quality of human mentality that is one of driving motives concerning game complexes has positive nature.

The entertainment industry offers developments which quickly adapt to modern life. There was a new formation of people and their requirements created new types of games.

To live playing… Is not this the dream that each of us from childhood? Playing to cook food, playing to move in space, to build, to fly. The task of the majority of games and attractions is to make a border between the real world and a dream thinner. And now the entertainment industry approached it as it is impossible close.