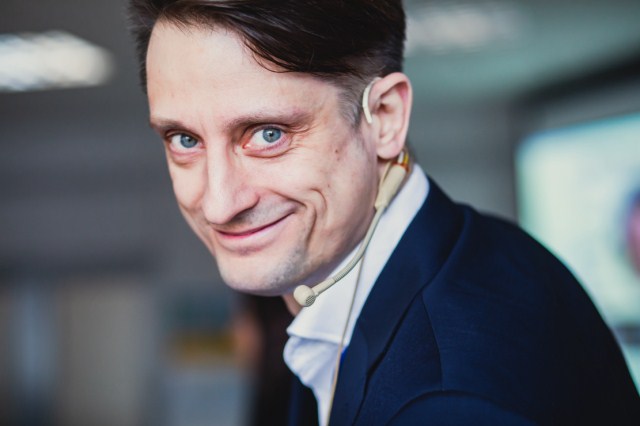 What is a biography? Just a listing of dates and events or intervals between these dates, which remain hidden behind short phrases: «Enlisted in 1994, and graduated in 1999 from SPGUSaF Statistics, Accounting and Economic Analysis Faculty." If you read my standard biography, you would never find out that during this period crucial decisions were made that influenced my further life. And this was what it is all about…

It was supposed that I would work in my father’s construction company. While still a student, I began to delve into the family business. I studied at the university and worked as a fitter in my father’s company at the same time. At some point I came to a realization that I’m giving away my time and energy to something that is of little interest to me.

«Work in something you really like and you will not work for a single day of your life» As corny as this admonition may sound, not everyone is able to turn it into reality. I managed to do it.

As it usually happens, it all started out of interest. In my youth i was fascinated with billiard. I was interested in all its manifestations, i wanted to understand, watch and play as long as i could get closer to this field. That is why i started working as a salesman in a billiard shop. This is how my career in the entertainment industry started. Anticipating the story, I will say that in three years I have grown from being a ordinary salesman to being the CEO.

«How is this possible?» — you may ask. The answer is, that this rapid development happened due to my own initiative and good education, in particular the knowledge of the English language. While selling billiard equipment i noticed that the purchases were made in a store that was just like ours, but in Finland. Then i decided to send letters to all the foreign suppliers to negotiate direct sales. The suppliers found my offer interesting and agreed to cooperate. This is how we became one of the first commercial organizations with the rights for product sales(Iwan Simonis, Aramith, Longoni, Italardesia) in the Russian territory and i was appointed the head of the store.

By 1999, not only the store, but also several billiard rooms were working successfully. Then the idea to gather all the pieces together and make something global came along. To create such a space where not only there was an opportunity to play pool, but also an opportunity to conduct championships and major international competitions. At the time, sites that allowed you to organize such events didn’t exist, not only in St. Petersburg, but neither in Russia in general. So we decided to sell everything and start a new project — the «Leader» entertainment complex. The owner of the business, appreciating my initiative and willingness to work, put me in charge of the management team.

Surprisingly, once «Leader» opened, my personal interest in billiard began to fade. One of the reasons probably was that I have always played at an amateur level. At «Leader» we immediately began to organize major events and conducted several major championships. After looking at the level of play from the professionals, I realized that I was far away from such heights. I studied, took lessons from coaches in an attempt to bring my game to a proper level, until i switched to bowling. This game also fascinated me until we opened a bowilng alley at the entertainment center.

«Leader» became the pioneer of big entertainment centers. On the enourmous territory of 25.000 square meters you had almost everything that at the time existed in the entertainment industry. Bowling, billiard, children’s amusement park «Dinosauria», table tennis, shooting galleries, restaurants, bars, clubs, karaoke, an electronic music club, and so on. We held festivals all the time featuring such renowned Djs as Paul van Dyk, Ferry Corsten and many more. Among the invited guests were Yulia Savicheva, bands like «Ruki vverh», «Korni», «Leningrad», Guano Apes etc.

For ten years «Leader» was the venue for major international tournaments. During the existence of the center, more than fifty diferent sporting events have been conducted inside its walls, including such prestigious competitions as the Longoni cup, The European Snooker Championship, the World Trick Shot Championship and Russian Championships in all types of billiard. «Leader» was the biggest billiard sports center in Europe, which took in an average of about seventy thousand people per month and up to six thousand in a day.

It is in the «Leader», we have organized the first large fan zone in Russia for the Germany-Russia qualifying match. More than two thousand people were the guests of the event.

Unfortunately, in 2012, the project had to be closed. Despite the success of the «Leader» the owner of the building did not share our interests and did not welcome this kind of business. At the end of the lease, an increase in the rate for the next ten years by several times was proposed to us. This proved to be an exorbitant sum and we shut the project down. Now, the children’s entertainment center «Marvellous City» is operating in place of the «Leader».

I have stayed in the entertainment business with a part of the team, having already implemented a personal approach to business. I have always wanted for the company to have a mission, a strategic map of development, corporate culture and values. The new entertainment centers were opened with these intentions in mind. The result, as you have probably guessed are the Maza Park in Saint-Petersburg, the FUN24 in Kazan and the Galaxy Park in Smolensk. These are multi-functional entertainment centers, that operate in the All inclusive format. After paying an entrance fee, guests can use the whole range of attractions, without having to pay extra.

The doors of our entertainiment centers are always open for you. I’ll see you in the world of entertainment!

In 2019, I published my first book, Fantastic Park. Entertainment Centers: From Projects to Happy Guests. That was an achievement I had been pursuing for 20 years of my professional career. Fantastic Park is a collection of my most interesting experiences. These are not just documents and projects; these are complete cases that you can apply to your own business. This book is a must-have for anyone involved in entertainment industry. I’m not saying this because I want to advertise my book, but because there are very few Russian authors writing about entertainment business. There are not enough books that reveal how companies should be founded in the conditions of Russian climate, culture, and mentality. Of course, you can read about foreign amusement centers and theme parks, like Disneyland, and use these texts for instruction and inspiration. But the designs covered in these books can hardly be applied to Russia. So, part of the reason I wrote this book is that I felt Russian entertainment industry needed it.