Business effortlessly: how to open the largest amusement park 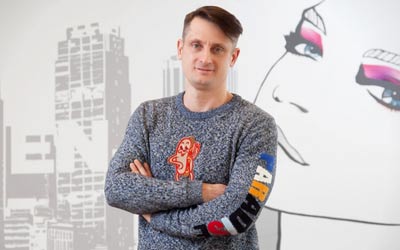 Who did not cherish a dream to have a personal huge park with attractions in childhood, where one can do anything he wants for the whole day? Having grown up, we have less time for entertainment, but the desire to relax in such a way still remains. The founder of the unique network of indoor amusement parks Pavel Timets told the portal BIBOSS about the reasons, why adults are big children, and how amusement parks help to turn a hobby into a job.

Being a student, I spent a lot of time in billiard rooms. I «was crazy» about billiards — I enjoyed being in this atmosphere, playing and communicating with professionals. At the same time, I worked as a fitter in the building company of my father. The parents guessed that building was of little interest to me, unlike billiards. That’s why, when I announced about my intention to get a job as a salesman in a billiard shop, they treated me right and supported me. I caught all the nuances of this work quickly and due to my initiative and knowledge of foreign languages, got the distribution of such world’s largest billiard market companies as- Iwan Simonis, Aramith, Longoni, Italardesia. Selling equipment, I noticed that the purchases are being made in another similar store in Finland. Then I decided to send out letters to all foreign manufacturing companies and arrange about sales directly. The proposal got the suppliers interested, and they agreed to cooperate. The owner of the shop noticed my activity and after a year and a half promoted me to the post of the store director. By the time he started the construction of the entertainment center «Leader» with a large billiard club for 120 tables, I showed myself to be an effective manager and was accepted into the project team.

I have been working as the general manager of «Leader» — the largest indoor entertainment complex in Russia for almost 10 years. This work carried me away completely and became my hobby. I was not married yet at that time and spent 60–70 hours a week at work. The «Leader» was closed in 2012 after a ten-year lease period. During this work, I received tremendous experience in managing the entertainment center and realized that the entertainment industry is my way. Together with the team of guys from the «Leader» I went in for a project of our own entertainment center. We were looking for investors, partners, developing a mission, a concept. The result of this work was the opening of the entertainment center Maza Park in St. Petersburg in 2013.

All our parks work on an all-inclusive system. Having payed for the entrance, our Guests can use any attractions, without any extra paying. We tested this concept in the «Leader» in summer in 2010 for the first time and received a stunning effect — revenue of 80–150 thousand rubles, instead of 30–60 thousand a day during the low season.

Much was received, but it was far from enough for the scale of a large center, so we began to look for additional opportunities. We came up to decision to adjust the ticket price, depending on the time and the day of week. Within a few weeks, we got revenue up to several hundred thousand rubles on weekdays and our records reached one million. This was a real breakthrough.

At the opening of Maza Park, we introduced the All Inclusive format from the first working day of the entertainment center. Due to this, the first year of our center turned to be the most successful in terms of attendance and revenue. After the launch of the first Maza Park, we began to open such parks almost every year: FUN24 in Kazan — 2014, the second Maza Park in St. Petersburg and Galaxy Park in Smolensk — 2015. When building large entertainment centers, we focus on the climatic features of the region and its population, first of all. Million-person cities with long and cold winters are rather actual for us.

Smolensk is a small city. We opened Galaxy Park there just because one of our partners is Smolensk citizen and he really wanted to give a gift to his native city. Galaxy Park is the largest entertainment center in Smolensk region. This is one of the most expensive, but the least cost-effective of our projects, if you focus on the cost of one square meter of its area. There were many difficulties. For example, we faced some regional specificities while selecting employees. The staff is cheaper there, but it is more difficult to find qualified specialists because of the personnel outflow to nearby Moscow.

I arrived in Kazan in 2014 for the first time to open the entertainment center FUN24. Here we faced disbelief in our abilities, as well as in that we could open the park quickly. We had to break up with some contractors by force, as they did not want to meet the deadline (we talked about six-months period, not a day later). FUN24 has become the best proof, that nothing is impossible, if you really want it. It was opened on schedule exactly, minute by minute. Some days before the opening, everyone is working on wear and tear, so after launching the entertainment center, we send the core of our team to a motivational trip, for example, to Cyprus or Egypt. People who have been forced and tight like a string for such a long time, relax and have a rest with pleasure. We conduct strategic sessions and trainings at the same time with the rest.

Kazan Entertainment Center differs from others. When we started FUN24 in Kazan we had a low revenue on Fridays. Though our experience in St. Petersburg made us sure, Friday is a profitable day, as it is a get-together day. But it turned out, that it’s customary to spend Fridays at home in a family atmosphere in Tatarstan. We have elaborated this lull by introducing Ultra All Inclusive in addition to All Inclusive. Such tickets are more expensive, but include drinks and food. This worked and people began to visit.

Working in an amusement park is realization of a dream for many people. The children of our employees boast: «My father or my mother has the best job in the world, because I can go to the entertainment center every day." And it is really so! When recruiting employees, we say: «If you are young and merry — come here and hang out with us!». Working cheerfully is a part of our corporate culture. We do not have references to «you» or patronymics, we are friends to each other. We practice days of self-management from time to time, when the manager of the entertainment center, serves in a wardrobe, for example. We encourage our colleagues in such a way and let them know: no work is shameful. The Chief Manager should treat the employees the way he would like them to treat the Guests.

The interests of visitors change as time goes by. Billiards is no longer popular entertainment and we replace it with other activities. We have two motor racing tracks in Kazan FUN24. It is a popular attraction, and we thought: why don’t we open several grounds in order to arrange the queue. Our expectation was justified.

Nowadays VR and computer games are at the top. We began to develop E-sports direction at once, as soon as we caught a sight of this trend. A large computer club was planned even during the construction stage in Smolensk Entertainment Center. The complete reformation of already functioning centers is difficult to be done. To organize a cyber-arena with thousand square meters’ area, we need serious investment and even a temporary closure of the center, perhaps. We are not ready to take such risks yet. But to start small cyber-zones is completely within our power.

The market dynamics is so that we lose from 7 to 15% of gross proceeds every year, since 2014. The reasons are the crisis and the decline of people’s incomes. People began to cut their expenses down, the average check decreased. But the decline slowed down in 2017. We hope that the events, we are preparing for the World Cup in 2018 will bring us positive dynamics.

An advice for beginning businessmen. Decide on long-term goals. Don’t do what is trendy, or the first thing that comes to your hand, or your friend advises you to do. Find something that brings you pleasure. This is what should become the basis of your business.

Pavel Timets is the founder of the largest indoor amusement parks in Russia such as Maza Park in St. Petersburg, FUN24 in Kazan and Galaxy Park in Smolensk. He was born in 1977 in St. Petersburg. He graduated from the Faculty of Statistics, Accounting and Economic Analysis of Saint Petersburg State University of Economics and Finance in 1999. He headed the largest billiard club in Europe «Leader» for 10 years. He is the General Manager «The Indoor Amusement Parks» Ltd since 2015.