One of the team. Manuchekhr Rasulov 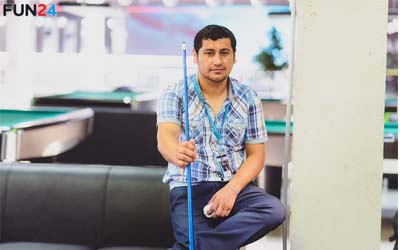 Nearly fifteen years Manuchekhr Rasulov works in our team. In the 2000th during flow of guest workers Manuchekhr has arrived to St. Petersburg from Tajikistan. Then we only started to build «Leader» and have involved him in process of our entertainment center construction. He was a helper, a general worker, after start working of the «Leader» he has worked there as a technician-mechanic nearly 10 years.

When the Center was closed in 2012 we kept on part of our team wherein Manuchekhr was among workers and have begun to build Maza Park. After successful opening of the Center, we have suggested him to go to Kazan to run FUN24. Manuchekhr agreed and continued to work already at a new place.

In fifteen years this man managed to get enormous and irreplaceable experience in area of entertainment center constructions. He got hang of a builder, an electrician, a technician as well as he unsighted of gaming equipment function. We realized that during our cooperation Manuchekhr proved himself as a good worker and at best.

Last year we had a problem with finding a person to the post of a head of the FUN24 Entertainment Center Operation Service. Within that short space of time two managers have been displaced hereon. By a reason close to that the psychologist Alfred Adler has stated: «Any authority who is not recognized spontaneously and shall be imposed by force is a forgery». These heads acted as «made» leaders and did not cope with their functionality at all. Their work was bad; success coefficient of current tasks was low. They were bosses but not leaders. Then we began to think who would assign to this place…

Chancy decision — to put Manouchehr Rasulov for this position was the result of thoughts. On a result, I can say with confidence that I have never regretted about this choice, Manuchekhr is the best head of the Operation Service whom I’ve seen.

While FUN24 was under construction, employees have worked with Manuchekhr saw that he knows all the ins and outs of construction, they knew — it is possible to address him on any question in this area. He was their «shadow» leader. Taken up appointment of the head, Manuchekhr has realized that his experience and qualities are recognized not only colleagues from his shop, but also the authorities, who took this personnel decision. Then he began to work even better. Besides, he became that leader who leads and sets an example.

Before we imposed heads from outside not considering any «hidden» leaders in the team. In this case solution of this personnel problem was in looking around and to reveal this person in collective. After that it was necessary to assign to him management functions and he was already the leader.