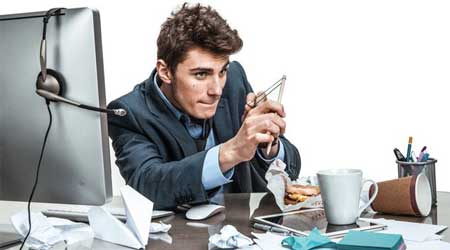 Dima, a system administrator, whose teeth has been aching for a week, works in a company «From soup to nuts». After dinner, Dima asked at heads for leave to a dentist. He was excused, but with a provision that he shall remain in the office to work the missed hours on Friday after seven.

On Friday nights, while most employees were drinking difficulties of the working week at the nearest bar, Dima was sitting in the office. Of course, that was out of the question on any work, however, the same can be said about 70% of time that Dima spent in the office.

What did Dima do? He was in communication with his friends VKontakte and watched videos on YouTube. Sat out two hours, our hero packed up his things and went home, where he continued that he had started-chatting, only he watched no video-blogs, but his favorite series — «Silicon Valley».

Sunday evening, Dima decided to get up to speed. There is no need to explain why on Monday it was very hard for him to wake up… Instead of 8:00, he came to the office closer to nine. For what he was in the hot seat, given flack and revoked his bonus.

Is it a sad story, huh? A balanced penalty scheme and a system of punishments led to a small tragedy. But it all started with the fact that Dima, like any person, once got a toothache. Does it happen to everyone?

Why do we often hear stories like the one that happened to Dima? Because many managers do not understand that relations with their employees should be built, first of all, on human relations.

In business and in life, I adhere to the «carrot or lack of a carrot» principle and prefer stimulation, not punishments. Why do we even resort to punishments and fines? Usually, the ultimate goal of these measures is to influence or change employee’s behavior. And then you should remember emotional intelligence.

Speaking from the perspective of emotional intelligence, the problem is solved by actionable feedback. Instead of a comment, it is better to give a recommendation to a person how to improve the situation. For example: «It would be great if you would answer letters during a day», instead of a negative phrase: «You answer letters for a long time». Such correct formulations are called «deltas». There must be at least two «pluses» for each «delta» to motivate a person to positive changes.

For the majority of people, stimulation is a holiday, but only because we rarely use them. Stimulation should become as a rule. Then an employee will open, and he will feel comfortable in a company. As far as I’m concerned, it’s better to overpraise a little than not to praise. And I will never tire of repeating that if even a satisfied cow gives more milk, then what we can say about Dima. :)