BAR COUNTER IS AS START FOR CAREER 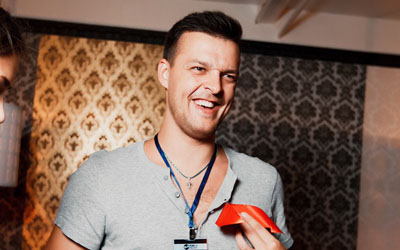 There is late night, low light and muffled music in a thin bar. A well tipsy person unburdens his heart to a bartender indifferently wiping glasses. It is a classical scene which directors and writers of the whole world do not cease to address. As a rule, each hero will have a story for a bartender-psychotherapist. At the same time it is unlikely someone thinks that on that side of a bar counter a story deserving not smaller attention can disappear. I want to tell you about one bartender…

Twenty-year-old student Oleg Mikhaylov for the first time appeared in «Leader» in 2008. Oleg studied at the Institution of Mechanical Engineers as an industrial engineer and in parallel earned additionally as a bartender. It is standard practice for most modern students. Every day we come in contact with waiters, selling assistants and pizza delivery persons. Most often young people take such work as a possibility of temporary earnings and consider it unpromising and how wrong they were!

For two years Oleg mixed cocktails, communicated with Guests and watched life of the entertainment center. When «Leader» was closed we had to dismiss all personnel. Some time Oleg worked in the specialty. And then he has known that a new project — Maza Park prepares to be started. The team was almost the same that in «Leader» and he has decided to join. Oleg already knew work of an entertainment center and all intrigues firsthand. We saw in him more — his potential. Never yet he worked as a manager or a head. Appointing Oleg to an administrator position we risked. But we staked on that he will easy join the team. And it happened.

While Oleg worked in Maza Park, we prepared for FUN24 opening — a covered amusement park in Kazan. Having learned about it, Oleg has decided to participate in the new project. On the one hand an exit from a zone of comfort and moving to other city was awaited him, and with another — it was a good opportunity to use means of social mobility. I know in my own right, despite all prospects of res nova it is not simply, to decide on moving from St. Petersburg (especially for the native person of the Northern capital). But for Oleg and his future wife Anya who at that time worked as a bartender in Maza Park this decision has come easily. In Kazan not only career but also personal history (Oleg and Anya married) has received its continuation.

Having moved to Kazan Anya became FUN24 banquet manager, and Oleg took a front manager position — a head that has in subordination of 70–80 people working with Guests. The front manager shall organizes work so that Guests were happy — to motivate his division and to adjust on the correct approach. Of course, big staff moreover and in a new amusement park it is a certain difficulty to work. But Oleg has got unique experience of project management from scratch, and he was well trained in resistance to stress in administrator working in Maza Park.
At a project startup stage there was no strict allocation of responsibilities. Roughly speaking, everybody made everything. Of course, everyone had tasks but when help was required, any person from team set to work. Oleg became an example of such approach both at a stage of the project launch, and after FUN24 start up.

When it was required, he has replaced a bar manager especially all the more so experience was already available. Then he worked as a F&B-manager. And for quite short term Oleg has already worked as a chief operating officer from who work of so vital divisions for entertainment center as service of operation, repair of the gaming equipment, cleaning, etc depends.

Observing as quickly Oleg penetrates into new projects, finds a common ground with people, gets out of difficult situations and generates ideas useful to business, we have understood how we were lucky with such employee. Therefore when at the beginning of this summer there was a question who will be appointed as a managing director of Galaxy Park entertainment center in Smolensk practically without deliberating, we have stopped on Oleg Mikhaylov’s candidacy.

There have passed nearly four months as Oleg with his wife Anya has moved from Kazan to Smolensk. Today he successfully copes with his duties of Galaxy Park managing director and reaches the delivered rates, once again meeting our expectations.

What’s up with I tell all of this… It is necessary to understand that not a position which you hold is important. «Fire in eyes», commitment, activity, interest and desire to develop is important. Possessing these qualities, it is possible to turn quickly enough from the bartender into the managing director of an entertainment center. But in the longer term, differences in that you are a bartender or a managing director is No. Both have identical task — excellent mood of Guests.

And, by the way, take my tip: next time having appeared behind a bar counter or paying off a waiter look narrowly more attentively at the person who serves you. Who knows where you will meet it in a couple of years…