People here have a completely different mentality and very difficult names and patronymics, for me at least 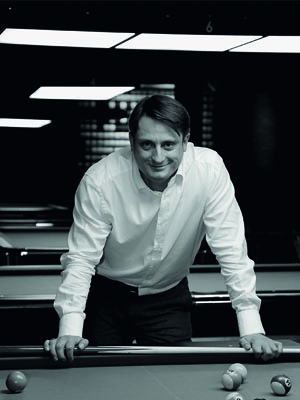 Why have you chosen the capital of Tatarstan for your business?

— Because it is — the third capital of Russia, a city with over a million inhabitants and a large number of universities. The age of our target audience — ranges from eighteen to twenty-two years, and there are a lot of students. In addition, in Kazan is actively developing domestic tourism, in particular, leisure entertainment. While tourists come to St. Petersburg to see the museum collections, unique exhibits and monuments, here the entertainment industry is now being dynamically promoted, popularizing active recreation.

How did the idea to open a non-stop amusement park appear?

— I am from St. Petersburg, and when we opened our first club there two and a half years ago, we already had a decade of experience in this field. We have developed a whole system from the beginning to the end, think through all the details. Kazan became the second city where we offer the maximum entertainment at an affordable price for a single ticket. After paying it, guests can stay with us as long as they want to and try their hand at all the available sites. So, you go bowling, get tired of it, and go to the pool table. You roller skate for a while and afterwards you can try your hand at laser tag. We have a lot to offer to our visitors — a karaoke club and a dance floor. We have collected the maximum amount of entertainment under one roof. Incidentally, the residents of Kazan for a long time did not understand that it is necessary to pay only once, and were awaiting a dirty trick at any moment. Now it is all in order. Now it’s Moscows and Yekaterinburgs turn.

Was it difficult to start a business in Kazan?

— People here have a completely different mentality and very difficult names and patronymics, for me at least. Еще, местные не любят работать в выходные. Это была проблема для круглосуточного проекта, но сейчас ее уже решили. Also, locals do not like working on weekends. It was a problem for a round the clock project, but now it is already resolved.

Business in the format of entertainment — is it a desire to return to childhood?

— I have been in this business for twenty years. As student i worked in a company that manufactured and sold equipment for billiards. After graduating from the University, i went to work from the shop to the largest billiard club in Russia «Leader», of which i became its CEO. In short, I know the business inside out. And my childhood — it is football in the yard, and a specialized school at the St. Petersburg University of Economics and Finance, where I later matriculated in the Faculty of Economics.

What are you proud of?

— I am proud of having a reward for conducting the best the World Cup in billiard, which was held at the «Leader» club in St. Petersburg. Nothing went smoothly there, and for us it was a great test. By the way, the team that worked with me then is still with me. It was something very interesting! In 2006, according to the newspaper «Business Petersburg» I was the best manager in my industry, by the way, the youngest ever at the time, I was twenty-five years old.

Now with the difficult economic situation in the country, and with the huge amount of entertainment establishements in Kazan. Will all this affect your business?

— The crisis should affect us positively. People will no longer travel abroad and spend money on expensive entertainment, and will come to us to have fun. In addition, we are planting a new leisure culture, showing young people that for the same money, for which they may buy beer and drink it at the entrance, they can come to us for a fun and interesting way to spend their time. And in general, breaking stereotypes — is a feature of our company.

What stereotypes are you talking about?

Our company is aimed at young people, and we have a rule — we all refer to each other with an informal «you», without taking into consideration who you are — the general director or the guy from the reception desk. We build friendships within the team and we want this atmosphere transferred to our guests. Being honest, here, this stereotype was hard to destroy.

The ideal leader, who is he?

The one who shows the direction by his own example, and doesn’t simply lead. I am one of those who know how to have fun and i can ignite others. I can get up on the bar and dance on it during the working hours of the club. I can greet visitors, i can do everything and i can participate in any role. My partner Anton likes conducting a derby, where you have to throw balls so that the cows run faster. For him, we installed a microphone next to the attraction. Someone who knows how to have fun himself can entertain others well.

What do you dream of?

Someday, maybe I will want to become the Governor of St. Petersburg. Sooner or later, the business will not require as much of my attention, and I will be able to make my city a better place. I think that in politics when there are people involved that do not need money, and they can give and not take — it will necessarily lead to something positive.

From the editor: Paul Timets is a fan of the St. Petersburg football club «Zenit» since his childhood. He doesn’t miss a single match and travels to the games of his favorite team anywhere in the world — it’s a hobby and a recreation for him. Paul is personally acquainted with many players of «Zenith», and is very fond of a gift from Andrei Arshavin — a boot with an autograph by the athlete.