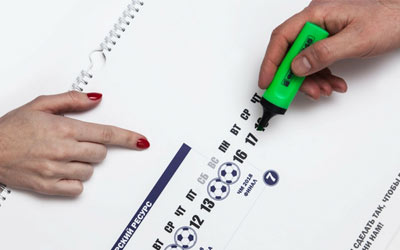 According to the Organizational Committee «Russia-2018», more than 1 million foreign fans will visit our country. The correct and well-timed preparation for FIFA 2018 will make it possible to increase the attendance of the center five times higher on weekdays, and by a factor of 1.5 — on weekends. On common days, the establishment is filled by 20–40%. Within the championship, games take place almost daily. Organized broadcasts of matches increase the attendance of the entertainment complex by 150–300%.

The interest to your establishment throughout the championship will provide a responsible approach to the first broadcasts. We should focus our attention on them, make them high-quality and memorable. People will share their impressions with each other, talk about the level of organization, that will attract new Guests in its turn. A good advice for establishments — find the leader of the project for the period of preparation and holding the championship. It will be perfect, if it is a person who takes an active interest in football.

It is possible to get high attendance of the entertainment center in the period of the Mundial by attracting various audiences — Russian and foreign fans, fan and national communities, volunteers. I’ll tell you about each of these audiences in details.

The broadcast of matches of the Russian national team and games that affect its position in the standings, will attract Russian fans, who can’t get to the stadium. And there will be plenty of them as well in the cities, hosting the championship, as in those places where the championship will not be taken place.

Recommendation on the attraction. Arrange your establishment with the attributions of championships, announce the program and inform about all the events on the site, in social networks and in the entertainment center beforehand. Emphasize the forthcoming broadcasts. The maximum number of people should feel the atmosphere of the holiday and come to know that your establishment is going to root for.

The cities, hosting the championship usually attract a huge number of foreign tourists. I have visited European and World championships more than once. When the team of your country takes off, and you come for the whole period of the Mundial, you start choosing the places to watch the rest of the matches. Usually, people go to the establishments where the football matches are being broadcasted, in such cases, or move to the official fan zones.

For example, a small-sized Konyushennaya squre, which can accommodate 5,500 people at a time and about 10,000 a day, was approved to be a fan zone in St. Petersburg. For such a large city it’s necessary to have a square for 150 thousand people. Accordingly, 140 thousand of fans will have to search for some other convenient places. The entertainment center should offer its service on time for this request. It’s the task for the organizers to do everything possible to lure foreigners, as they have a high average check.

Recommendation on the attraction. Working with such applications and international sites of independent reviews as TripAdvisor, Google Trips, HRS, HolidayCheck, Yelp is very effective. You can also set up advertising in social networks for coming tourists by hotels’ geolocation and among the groups of fans, moving to matches. Distribute leaflets in public-gathering places, leave information papers at the reception desks in hotels, use advertising at airports and train stations.

Invite fan-communities of the Russian national team, local football clubs and the consolidations of fans to broadcasts.

There are diasporas, ready to support their teams, in many cities. It is worthy of contacting with them and suggesting a place for match reviews. This is an opportunity to attract people to non-key broadcasts. The presence of fans from authentic countries, for example, such as Colombia or Argentina, can bring additional atmosphere and festivity to the event.

Cooperation with volunteer organizations is actual for cities hosting FIFA 2018. Young people take an active part in the preparation and conducting the championship in these cities. The entertaining center should reach the volunteers with interesting partnership conditions.

Recommendation on the attraction. Often, such organizations need some places for the casting, training and teaching the volunteers. They also have a budget for the closing party as a gratitude to the volunteers for the work done. Offer them your place for weekdays.

Make friends with volunteers — give them tickets to the entertainment center, provide pleasant discounts. They should know about your establishment and the upcoming broadcasts. You will get the loyalty of the people, who will coordinate all the fans during the championships in return. Tourists usually ask them for help and want to know where to go to. In case of well-structured interaction, the volunteers will advise foreign fans to visit your establishment.

Usually the expenses for the event are paid off by three matches of the Russian national team. The main budget line may include such items as:

In fact, it is not so. The compensation is carried out by means of the employees of the entertainment center, who are used as backup and have part-time job. There is a stock of employees, working with much more people on weekends, than on weekdays in every establishment.

Many employees (students, having a part-time job, days-off workers) are happy to have an additional opportunity to earn money and at the same time participate in a large-scale event. In case that there is no reserve in your establishment, you should attend to staff recruiting during the event.

More than just a broadcast

To give fans a holiday is the main task for the broadcast organizers. This is the guarantee of a successful event, which will be remembered by the Guests for a long time and will bring profit. The atmosphere is very important for any entertaining center, so it’s necessary to decorate your establishment with the symbols of the championship two or three months earlier.

If you want to save money, you may ask your entertainment center animators to entertain as the announcers and cheerleaders. They can swing the fans with screamers, organize flash-mobs, or perform a hymn together. Invite aqua makeup-artists to decorate the guests’ faces with flags and football symbols.

It is worth making encouragements for every goal of the Russian national team (as beer or shot drinks). Conduct drawings, in which the tickets to matches or to entertainment center will be given as a prize. Fans always take an active part in drawings. The Guests are given out some forms, where they have to write their forecast for the final score, leaving their contact telephone number. Thus, the organizers get a base of phone numbers, and those who guessed the score — prizes.

If you have a network of establishments in different cities, organize video-links. During the breaks between matches, show fans from another cities on the screen in order to entertain guests, congratulate each other and discuss the game.

In addition to the basic income from broadcasts, you can profit from additional sales. Organize some outlets for selling souvenirs on the territory of the entertainment center or sell advertisement during the broadcast.

Special menu and decoration of food in the championship style will increase the ratio of cost to revenue. It’s possible to include highly-marginal products and fulfill food décor for such a menu. For example, you may buy burgers with flags of the countries, participating in the championship or design a thematic package. These all are just details, but they create an atmosphere of a holiday, more than anything else.

Our experience of conducting similar events shows that their organization does not require high expenses and is rapidly payed off, allows to attract a new audience, part of which turns to become permanent Guests. There is not much time left till FIFA 2018, but it’s enough to prepare. Do not miss this chance. There mightn’t be some other chance.