Where to buy a magic wand of Harry Potter? 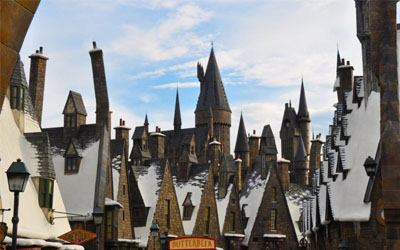 Attraction theme parks are very popular in America. For example, there are about eight such parks in Orlando. To visit all parks people come a week at least. I was struck by The Wizarding World of Harry Potter that is a part of Universal Studios Park. There are no analogs of this attraction anywhere in the world, and its cost is higher than in any Russian park.

Americans turned into reality a fairy city created by Joanna Rowling’s imagination in reality, thinking through all the details! A whole quarter was given to the world of Witchcraft and Wizardry. Here you can compete with dragons, fly on Hippogriff (a stripped-down option of the roller coaster), play Quidditch. You also can drink a couple of cocktails in Hog’s Head Bar; buy chocolate frogs in Honeydukes and walk into a store of magic wands. I am well over thirty, but even I purchased a few wands because I could not but I bought them!

A way to a roller coaster is through the Hogwarts castle. Long queues are usually for this attraction. Founders of The Wizarding World of Harry Potter have decided to entertain visitors and have made the way to the roller coaster as journey at School of Witchcraft and Wizardry. Accompanied by 3D — heroes you come upstairs where portraits talk with each other, you come into educational classes and secret rooms. Walk on Hogwarts takes about 20–25 minutes. I feel like impressions of the roller coaster are 10% of emotions, the remained 90% are the way to it.

Pleasant completion of walk on The Wizarding World of Harry Potter is a campaign in owlery. There anyone can send to friends (or yourself) a pleasant souvenir — a letter with a Hogsmeade’s mail stamp.