On the eve of New Year’s holidays, it is accepted to sum up the year results. 2016 became the first year for us when we did not open any new entertainment center.

Baby boom in the company

We surely followed the internal mission of the company: «Helping young people to find friends, building relationships and feeling happy at work». Perhaps that is why we had a real baby boom in our team!

This year, five of our employees became parents — Anton Sigayev, Kostya Ivanov, Asya Zakalyuzhnaya, Denis Bulychenko and Dina Burganova. Denis and Dina’s couple developed during the work. If there were no amusement parks, perhaps, they would never have met.

But wait, there is more! It is already known that Maxim Miklashevsky, Oleg Savenkov, Oleg Mikhaylov and Anna Mikhaylova are waiting for replenishment in their families in 2017. Oleg and Anna is a couple that was formed in the company, too. I will tell you a secret, I with my spouse support the trend and we are going to become parents for the second time.

I think, happy childhood waits for our children, part of which will be held at amusement parks. If parents have an interesting work — you have a distinct advantage over peers. What can be better than parents who work at an amusement park? It’s the dream of every child!

Svyatoslav, Arkady Sokolov' son, visited an amusement park for the first time when he was 1.5 years old. Now all personnel of the entertainment center know the four-year Svyatoslav. He comes at FUN24 at least once a week. And then he tells in his kindergarten how it is cool at his dad’s work! 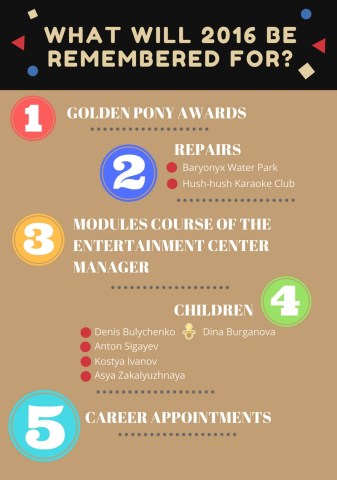 One more important achievement in 2016 was the fact that I and Ksenia Biushkina started the Development Course of the Entertainment Center Manager in the autumn. Especially for this we completed training to trainer’s skills. Almost a year we developed the course program, as a result we have structured all knowledge of the company and made our own training.

In Kazan we took in management the Baryonyx water park. Final repair operation of locker rooms, showers, saunas, etc. Is now conducted. In late December, the water park is scheduled to open after reconstruction.

And we closed the «Sing up» karaoke club in Kazan and handed it as a type of the successful «Hush-hush» karaoke club in Smolensk. We expanded the area, made two levels of seats for Guests, completely changed design. Light and sound remained at the previous high-quality level. At the same time price of this service has not changed.

Separately I want to mention Oleg Savenkov who in a year passed the way from the business analyst to the operating officer at FUN24.

Our progress was noted by the world community and this year we received the prestigious international award, the Oscar in the amusement industry — Golden Pony Awards.

A year ago, I could not even imagine that this year will be so eventful. Already now we made a lot of things that the next year will be successful. I am confident that 2017 will please us still more. I wish summing up the results next December, we all would have something to remember!