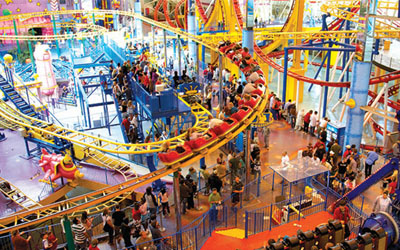 The main difference is climate. Business must be developed in conditions of severe and long Russian winters. For this reason the majority of our amusement parks is covered i.e. are inside. There are a lot of such entertainment centers in China and Taiwan. In Europe and America, on the contrary, this market segment is not provided widely.

Compared with Asia we have a difference in attendance. In Mainland China gambling are forbidden because people are very gambling there. Here, of course, gambling is also prohibited, but Russians are not so risk. Any arcade-like topic and games such as «burst 10 balls — win a prize» go east with a bang. At the expense of it the Asian centers are jammed and develop as easy replacement of game dependence.

Any topics and arcade games such as «bursting 10 balls — get a prize» are with a bang in the East. Due to this, Asian centers are crowded and develop as easy replacement of problem gambling.
In America, as well as in Europe, I did not see large covered parks. But another popular trend is popular there — theme parks of attractions. One of such project is The Wizarding World of Harry Potter as a part of the American park Universal Studios. I wrote about it in one of the previous posts.

Among the differences it is also worth noting that there are a lot of sports entertainments (billiards, bowling, darts, rollers) in the domestic covered amusement parks. In foreign parks — these are less. Usually, bowling is just bowling, and billiard rooms are just billiard rooms (separate small places). We have all large-scale. Founders of entertainment centers try to cover all assortment introduced to the market of entertainment services.