Находясь на Timets.net Вы соглашаетесь с использованием cookies.
Главная » Blog » It is important to learn how make projects together, so that they work in the desired direction

It is important to learn how make projects together, so that they work in the desired direction 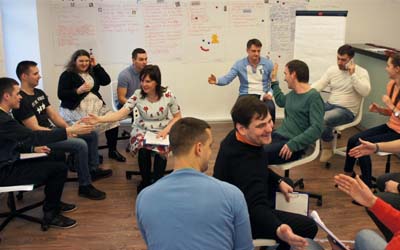 In the USSR, they used to say that «the human resources decide everything» and they were right. With a good and professional team the path to success is significantly shorter. So how do you create a dream team?

Not that long ago, a business analyst Ksusha Biushkina and i organized and conducted a corporate training of an unprecedented scale, called Strategic Session of the «Indoor amusement parks» company.

For those who are puzzled introduces the phrase «strategic session», I will explain, is a multi-day brainstorming session, during which the representatives of the company (in this case from different cities), together with the management to develop and set goals for the development of business in the near future.

Why is it needed? If I take the strategic map of the company and come with it to the employees, half of them will not finish reading the document to the end. The second half will not understand what it was about and what was expected of them. This will happen due to many factors: the lack of involvement and interest, misunderstandings, etc. In any case, the strategic map won’t work and will remain unclear to everyone but me.

You can go the other way around — to jointly develop all goals and objectives jointly with the team. Thus, the strategic map and its structure will become clearer and more precise. Due to this, the staff’s efficiency will increase. It is important to learn how to make projects together, so that they work in the desired direction!

So, on the first day of the session, we were «dreamers» that were setting unreachable goals. Such as «launch our own airline», «hold the Victoria Secret’s final show in our malls», «make so that the „KPA“ LTD stock“ is above Apple’s stock», the rest of the dreams-goals i will modestly omit.

On the second day we correlated the dreams with the reality decided which ones are worth to implement. We studied the implementation paths in detail, speaking in strategists slang we «smarted». This is how we were able to leave only those projects which are feasible in practice and determine what is necessary for their successful launch.

We liked the SMART system, so on the third day we «smarted» everything «smartable» and summed up, setting global goals for the company. In other words, we were already moving from the particular to the general

For me, as a leader, it was extremely important to share with the team that we have about 35 ideas for new projects! So there is a lot of possibilities — from opening an hotel to managing an aquatic park. Strategic Session showed those that were interested in the projects and potentially ready to deal with them.

I can say that one of the major results of the session, the one that i was sincerely hoping for with all my heart, was teambuilding, unity, division of responsibilities and ideas. A concentrated team composition was formed which empathizes with the interests of the company and in the future will relay the ideas for the staff of the subdivisions.

Anna Bessmertnaya, Ksusha Biushkina, Dina Burganova, Renat Grankin, Asya Zakaluzhnaya, Igor Levidov, Svetlana Mariri, Kristina Markova, Maxim Miklashevskiy, Oleg Mikhailov, Anton Rumyantsev, Oleg Savenkov, Anton Sigayev, Maxim Tsybin, Sergey Chubich — i hope that eventually, we all together will make the «KPA» a dream company and that you all will become universal soldiers, that can cope with any task — from negotiating with Victoria’s Secret’s angel’s managers to opening an entertainment center in Frankfurt am Main (and this, i will reveal a secret, is one of the strategic objectives for the near future.
Don’t relax and get ready for a new strategic session at the beginning of summer